Chaotic, hot, and unfriendly is how I would have described my 1st experience in Hanoi.  I arrived after a long flight from Los Angeles excited to explore and sightsee; however, upon arriving I was met with an unexpected welcome from a local airport attendant. As I was washing my hands in the bathroom the attended came up to me, placed her hand on my upper arm squeezed it commented on my size and laughed. I have done many travels all over the world without ever having experienced this sort of reaction to my body. I was a little annoyed to say the least but too tired to care so I did my best to smile and shrug it off.

A few days later I hired a cyclo tour guide to take me around Hanoi on a rainy day for some sightseeing. We stopped off at several museums and as I was taking pictures at the Vietnam Military History museum a local male vendor approached me, placed his hand on my arm and said “you are big”, again I was shocked what a rude comment! I didn’t understand how or why he felt he could approach me, touch me and say that? Now I was more than just annoyed, my feelings were hurt and I was angry. Since arriving I felt as if I was already doing my best to make the most in a city that was ridiculously hot, humid and was becoming increasingly more rude with each passing day.

My next stop on this day of sightseeing was the Ho Chi Minh Mausoleum. As I was leaving a local woman approached me again, squeezed my arm, and commented on my size. This time, I was not so kind in return. My cyclo driver had to come and rescue me from the situation I was in. Disgusted at this point with the rudeness I was encountering I was ready to call it a day. I asked my cyclo driver to take me back to my hotel but he insisted I visit the Temple of Literature.

As we arrived at the Temple of Literature you could hear thunder off in the distance and there was a flash of lightning but just a light drizzle. I put on my rain poncho jumped out of my cyclo and as I was walking up to the main entrance I noticed a young monk taking a picture. As I walked past him into the 1st courtyard he flashed me a big friendly smile. I smiled back then proceeded to slowly stroll along admiring the plants and flowers.

There was a sense of peace and calmness once inside the brick walls of that 1st courtyard. The hustle and bustle of the city seemed to disappear. I was taking it all in when I noticed the young monk again. Each time I would walk to an area of the grounds to take some pictures I’d turn around and there he would be smiling my way. I would smile back and we continued this way for a while; no words just smiles.

The thunder was growing louder, the lightning was getting closer, and the rain began to come down hard. I stopped under an overhang to wait out the storm and so did the monk. A solid 30 minutes had passed and still, the rain showed no signs of letting up. With nowhere to go, I turned to the monk and just as I was about to try and communicate with him I noticed his camera was pointed at me. I flashed him a smile and he snapped a shot. He then walked over and showed me the screen on his camera displaying the picture he had just taken of me. Pointing at the picture he looked up at me, smiled and said “Beautiful”.  I stood there doing my best to fight back the tears. It was such an unexpected genuine and kind compliment. It was as if he knew I needed to hear that to lift my spirits after feeling judged by all the negative comments I had received about my size. I told him he was beautiful and we did our best to communicate for a bit. He then asked if we could take a picture together. Shortly after taking the picture he smiled at me once more then stepped out into the rain and walked away. 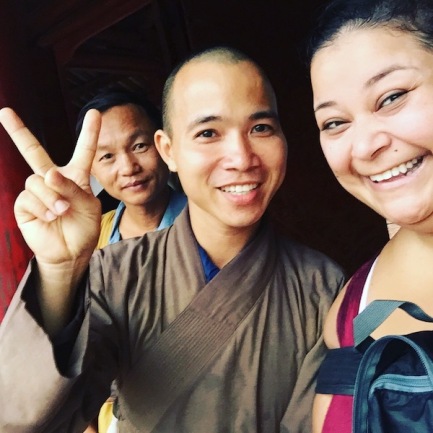 Hanoi may have started off as a city I would have referred to as one of my least favorite places that I’ve ever traveled too. But that monk on that rainy day with one word his kind eyes and that smile washed away all of my angry feelings. He will forever be in my heart. I am grateful for the opportunity to have traveled to Vietnam and to have experienced its true beauty on a rainy day in the Temple of Literature. 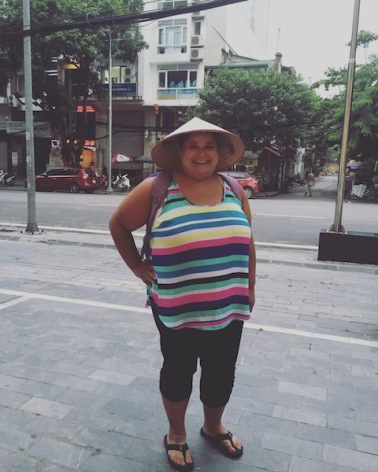 Traveler, Blogger & Event Planner. A firm believer that all you need in life is travels, the beach, and love. View all posts by Claudia Avalos

This site uses Akismet to reduce spam. Learn how your comment data is processed.